Online SkiRental - How to do

Pleasure & performance :
on site equipment preparation for every snow conditions.

Sharpening, maintaining and adjusting
YOUR SKIS IN TIGNES

Where to have your skis repaired, sharpened and adjusted?
In the technical workshop of the store Mountain Story!
Because our rental skis must always be in perfect condition throughout the season, Mountain Story technicians team specializes in the adjustment and repairing of all skis. Our workshop is ideally located at the foot of the ski slopes, near Tovière and Palafour ski lifts. It is open to all skiers and snowboarders of Tignes needing to have their equipment repaired or adjusted during the course or at the end of the day.

Repair a ski
OR SNOWBOARD SOLE

Whether the snow is scarce, or you have decided to go through the corridors of the tuffs in an daring way, the sole of your skis can be seriously damaged. For a better glide, from one season to the next, it is recommended to carry out a check. After cleaning and degreasing the sole, our skimen, according to the state of degradation, proceed: 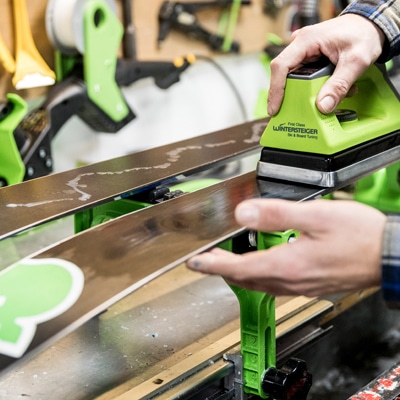 With 6 certified & skilled ski technicians, fond of snowsports !
Skis all set now,
have you thought about your shoes? 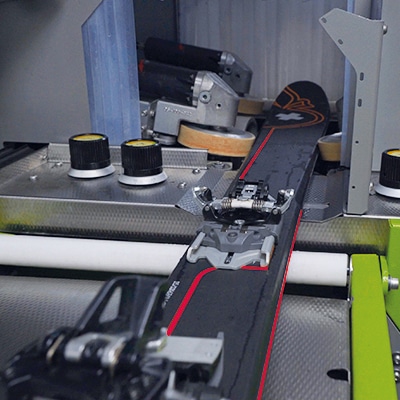 Sharpen the edges of your skis in Tignes Le Lac:
EXPRESS SERVICE

Equipped with an automatic ceramic sharpener, Mountain Story gives your skis back in a few minutes the biting that time and the end of the season may have blunted. It is advisable to come from Sunday afternoon to Thursday, in season to benefit from faster service.

OUR SKI RANGES
for rental / sale

Never buy without a try…
How to buy your skis wisely

Waxing of the skis:
THE SECRET OF GOOD SKIING.

Contrary to what one thinks, one does not ski on snow … but on water. Indeed, the gliding of a ski is done on a few microns thick water film, which is formed because of the friction of the ski on the snow. The challenge of waxing will be to optimize the gliding conditions by promoting the appearance of this very thin film of water.
Waxing consists of filling in depth the ski sole which is designed as a wax sponge. Contrary to what one might imagine, the sole of the ski is absolutely not a perfectly smooth surface.

When should you wax your skis? As soon as white traces appear on the sole of the ski, it is necessary to wax , in order to ensure a good glide. These traces correspond to the dry zones where there is no more wax.

3 reasons to wax your skis

Waxing improves gliding by smoothing the structural defects of the ski sole. It gives back to the sole its original structure. A white sole is the equivalent of a sole abraded by friction and is therefore “fluffy” at the microscopic level. Waxing also helps to protect the sole from inevitable micro-aggressions (roots, small rocks etc.), which, by attacking the wax preserve the sole.
How to wax? The most effective waxing is done with a waxing iron, which allows the wax to penetrate deeper into the sole. This is a delicate operation, since the temperature must not exceed 110 ° to avoid irretrievably destroying the sole. Entrust your waxing to a pro such as Mountain Story technicians, and let the iron from home to the shirts!

Waxing is recommended at least once per season. But ideally, a cold waxing, according to daytime snow temperatures should  be done daily.

During summer, I rent my mountain Bike
AT MOUNTAIN STORY